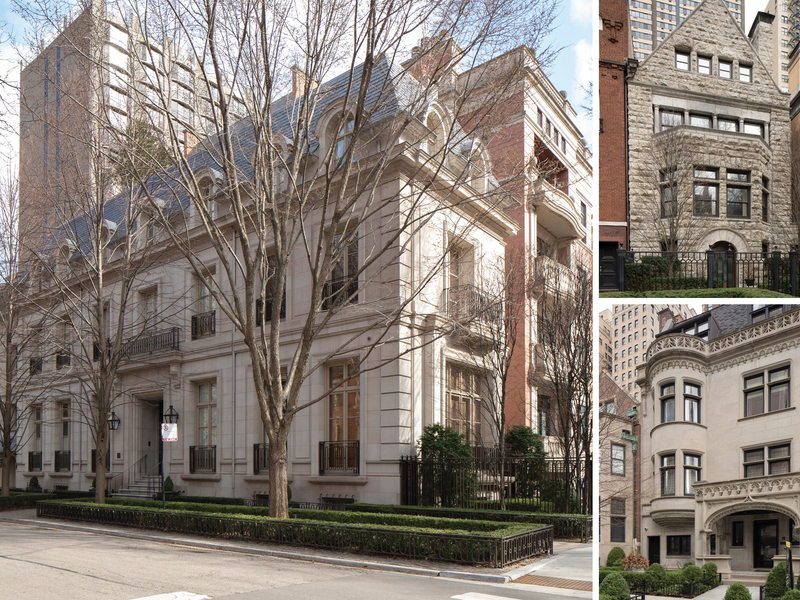 Ron Chez listed his Astor Street mansion in December for the third time.

Chez has owned the home, which overlooks the grounds of the historic archbishop’s mansion, since 2000, when he paid a little over $8.1 million for it.

Chez is asking nearly $11 million, a million more than he was asking before. That’s despite the fact that the recent high-water mark for home prices on the leafy, mansion-lined blocks of the Gold Coast is $7.5 million, which buyers paid for a home on Bellevue Place in 2017.

“I’m not looking at what other people are doing. What the rest of the market is doing doesn’t concern me very much,” Chez says, speaking from his oceanfront mansion near Big Sur, Calif. “It’s a very special home, and fortunately I can wait. I don’t have to sell it, which is always good with illiquid assets.”

It’s a useful mindset to have when trying to sell an upper-end home these days on the Gold Coast, where Chez’s home is just one in a logjam of big-dollar mansions for sale.

In mid-March, there were so many Gold Coast homes for sale at $5 million and up that at the current pace of the market, it would take nearly 12 years to sell all of them, the biggest glut in this longtime reporter’s memory. Fourteen homes were listed at $5 million or more, and in the past five years, there have been six sales at those prices.

The Gold Coast, about 18 square blocks from Walton Street to North Avenue and from Lake Michigan to a few blocks west, is looking less golden than it did as recently as 2007, when the neighborhood had three of the Chicago area’s highest-priced home sales, at $8 million, $9.2 million and $14.5 million. The highest of them, a purchase by J.B. and M.K. Pritzker long before he became a politician, remains the highest price in the neighborhood, more than a dozen years out.

A stalled Gold Coast mansion market matters to the rest of the city because high net worth buyers who could go to the Gold Coast but instead opt for Winnetka, Lake Forest or Hinsdale take their property tax payments, private-school tuition and restaurant tabs with them. It also shows how quickly a place that just a few years ago was a magnet for mega-bucks buyers can start to look tarnished, a cautionary tale for other fashionable areas. It looks like more people want to get out of the Gold Coast than want to get in.

But oversupply won’t necessarily push prices down in this tony neighborhood. While in most circumstances that would be the case, most of these high-end sellers have not yet slashed prices or sold at discounts, seemingly because, as Chez says, they don’t have to sell.

Much has changed since the Pritzkers moved to the Gold Coast from Evanston. Developers have put up spectacular condo towers whose shiny newness and family-sized spaces drew high net worth buyers’ eyes away from historical mansions that need updating.

Tim Salm, a Jameson Sotheby’s International Realty agent who represented the sellers in two $5 million-plus home sales in 2020, says both were relatively new construction. One, a State Parkway home that went for more than $5.9 million, was built in 2019, and the other, a Cedar Street home that sold for a little over $5.3 million, was built in 2016.

“They had all the bells and whistles,” Salm says in a text message.

The pandemic added a new hindrance.

Upper-end buying tilted toward suburban homes with lots of outdoor space. Among multimillion-dollar buyers, “the pandemic-related flight to the suburbs has been real,” says Katherine Malkin, a Compass agent who primarily works with high-end downtown properties.

At the moment, Malkin is representing two homes in the logjam: an Astor Street mansion that has been on the market for three years and taken $2.7 million in cuts, to the present asking price of $6.25 million, and a 20,000-square-footer on Burton Place that went up for sale in November at $18.75 million.

The owners of homes like these, Malkin says, “have an asset sitting on the southeast corner of their balance sheet, and they’re not going to accept a loss on it. They’re comfortable holding it until somebody comes along who values it as much as they do.”

Discount sellers disappoint their neighbors, who feel the drag on the market value of their own homes.

Of course, some sellers cut and run. In early 2020, a Dearborn Street mansion whose seller had spent at least $6.9 million to buy and rehab it sold for just $3.8 million.

Jenny Ames, the Engel & Volkers agent representing Chez’s mansion, says that more typical among owners of these homes is the feeling that “the market will come to them. Somebody will recognize the value of what they are offering.”

Chez, a lifelong Chicagoan who now has not only the Astor Street and California homes but an apartment in New York, says that “I simply cannot understand why people are not paying more for homes in Chicago.”

While spasms of social unrest in 2020 contributed to steep drop-offs in sales in places like Streeterville, River North and the Loop, Ames doesn’t believe it impacted the Gold Coast mansion market.

“People who were in high-rises watching it out their windows on Michigan Avenue: They had a front row seat, and it shook them up,” Ames says. “If you were in one of these big homes on North State Parkway or Dearborn or Astor, the social unrest wasn’t that close.”

“People who are paying multiple millions for a house aren’t going to stop because of the tax bill,” Chez says. His property tax bill on Astor Street is about $80,000 a year, but “California, where property taxes are configured more favorably than Chicago, has onerous personal income taxes.”

Even if they’ve been extensively rehabbed, Gold Coast mansions are still narrow relative to homes in Lincoln Park or new condos built broad like suburban ranch houses. Historical homes often “have some sort of limitation versus new construction,” Salm says. Potential buyers “have to commit to doing their own renovation and a lot of buyers don’t want to wait,” he says.