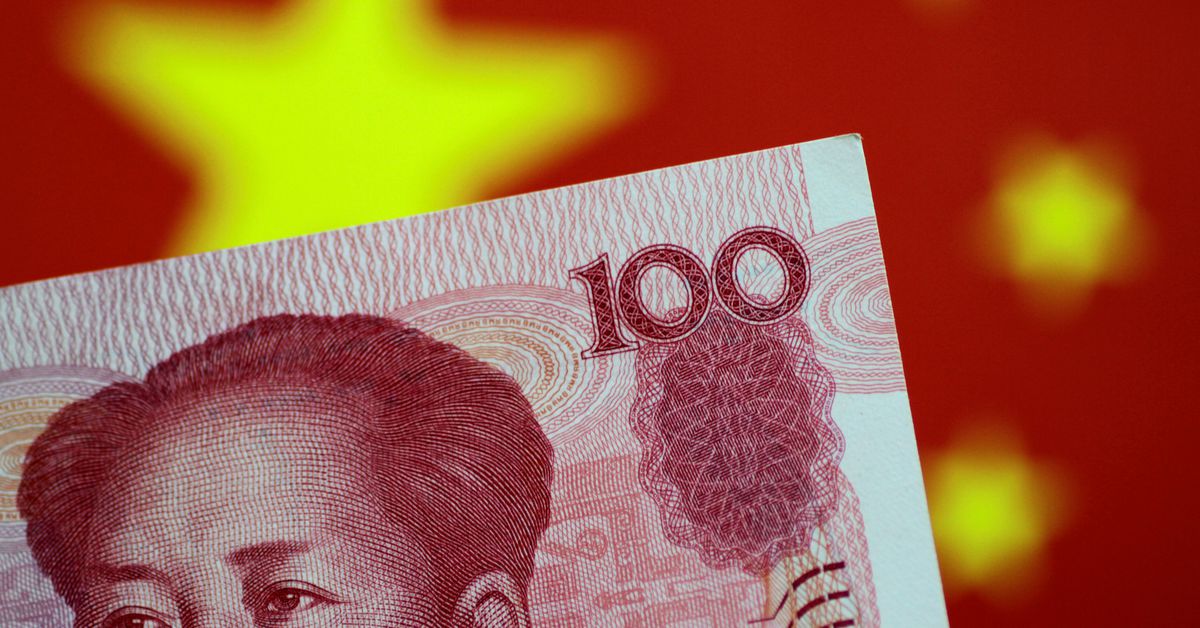 A China yuan note is seen in this illustration photo May 31, 2017. REUTERS/Thomas White/Illustration

SINGAPORE, Sept 15 (Reuters) – Brokerages in China have dropped detailed currency forecasts from their research notes, or have restricted access to them, underlining the growing sensitivity in the financial sector to a regulatory clampdown on speculative investment.

Their disappearance follows pressure to avoid stockmarket forecasts as well as a ban by authorities on publishing commodity prices, amid a series of sprawling crackdowns that are re-shaping China’s economy and upending financial markets.

It also comes at a delicate moment for the yuan, which China has sought to promote as a global reserve currency but which is tightly managed by the central bank and has been stubbornly firm recently despite a broadly strong dollar.

The market effect of publishing only generalised forecasts is unclear, particularly as foreign institutions continue to offer precise ones. Clients can also privately access projections – a useful tool for corporates in managing foreign exchange exposure.

Multiple sources at brokerages and banks said the trend of avoiding detailed public forecasts has become widespread over the past few months.

Reuters’ analysis of months of notes from four brokers in China shows once-detailed forecasts for the Chinese currency against the dollar have now vanished or grown fuzzy, with precise predictions replaced by ranges or vague statements. None of these brokers answered to questions about the shift.

Two currency traders at banks said the trend was in response to pressure from China’s central bank and its foreign exchange division.

“It’s getting way harsh now. If you are asking traders (for yuan forecasts), it will be very inconvenient,” said one trader at a state-owned bank, who, like the other sources, requested anonymity because he is not authorised to speak publicly.

“When the yuan hit sensitive levels a few months ago, the PBOC and CFETS repeatedly asked traders not to make public predictions to guide market expectations,” he said, referring to the People’s Bank of China (PBOC) and the FX trading system it manages.

The PBOC and China’s State Administration of Foreign Exchange (SAFE), the forex regulator, did not respond to faxed questions about their position on forecasts.

Another trader said avoiding projecting a rise or a fall in the yuan was in keeping with public comments from SAFE head Pan Gongsheng who in June said that markets should expect two-way volatility and businesses should take a “risk neutral” position.

But recent state-bank selling points to some possible official discomfort about its strength.

Non-deliverable forwards markets are priced for a slight fall in the yuan to around 6.56 per dollar in six months. .

More than a dozen foreign banks, which continue to publish yuan forecasts, declined to comment or had no immediate response when asked whether they faced similar regulatory pressure. The foreign banks were divided on the direction of the currency.

Onshore in China, since June more typical price-level projections, subject to risks, have been replaced in research with ranges and broad statements.

In May, for example, China’s biggest brokerage, CITIC Securities (600030.SS) published a note saying the yuan had room to rise and could climb as far as 6.2 per dollar.

But it has since avoided specific forecast levels and in August published research saying the yuan might weaken slightly in the short term, but was overall evenly balanced. CITIC did not respond to emailed questions about the change in forecast.

Research from Shenwan Hongyuan Securities (0218.HK), (000166.SZ) and Zheshang Securities (601878.SS) has also shifted from numerical forecasts, offered before June, to vague wording saying the yuan could rise if the dollar fell – or vice versa – or that they expect two-way volatility.

“For mid- to long-term views, we firmly believe that the yuan will appreciate against the dollar for about eight years,” Zheshang analysts said in note this week.

Zheshang Securities did not answer emailed questions about the changes in research, while Shenwan Hongyuan declined to answer questions about its yuan forecast and referred Reuters back to its own research note.

A fourth broker, Huatai Securities, with offices in Beijing and in Hong Kong omitted detailed forecasts from its recent Chinese-language reports but retained them in English-language notes prepared by analysts in Hong Kong.

Hutai did not respond to an emailed request for comment.

One onshore broker analyst and another at a bank said private access to forecasts is still available to clients.

Yet with fewer public research reports to drive a consensus, one outcome of the shift could be a divergence in corporate views on the currency, said Liu Wencai, founder of Shanghai-based risk-management consultancy D-Union.

“Regulators hope that companies don’t have consensus views and become the central bank’s counterparty,” he said.

Chinese corporations’ dollar deposits stood at an enormous $999.7 billion at the end of August, enough dry powder to shake up the exchange rate if they were suddenly swapped for yuan.

“It seems the authorities have loosened their grip on the currency. But in reality, they are holding it even tighter, not allowing (sharp) appreciation or depreciation,” said one offshore analyst at a foreign bank who requested anonymity.

“(Our bank) is managing the way how it publishes (forecast) notes on financial platform in mainland; all seems to be very sensitive and no one dares to comment.”