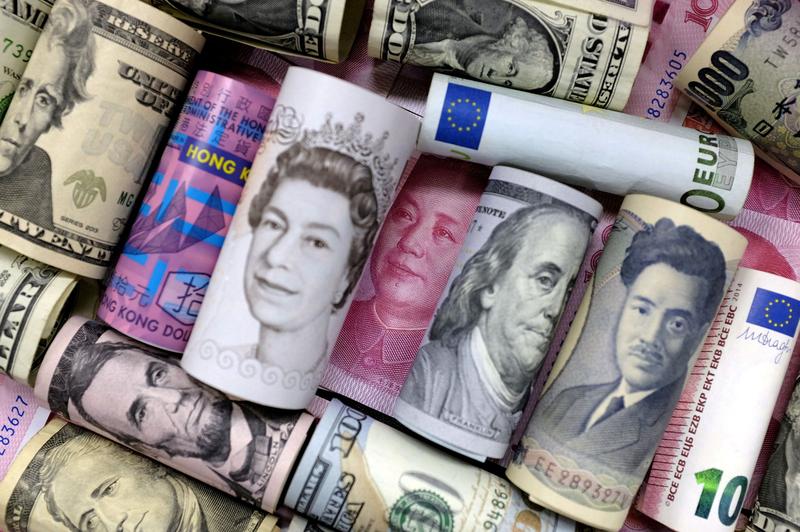 NEW YORK (Reuters) -The U.S. dollar softened slightly on Friday, along with the Japanese yen and the Swiss franc, as risk appetite recovered, with the rally in U.S. Treasuries running out of steam and global stock markets steadying.

The dollar index slid 0.114% to 92.259, just a few pips from where it ended the previous week, with the greenback in a holding pattern as traders assess new concerns about the pace of the global economic recovery from COVID-19 in the face of fast-spreading variants. Graphic: World FX rates tmsnrt.rs/2RBWI5E

The slight dip in the greenback was likely profit-taking ahead of some key U.S. data next week, including retail sales and inflation numbers for June, said Joe Manimbo, senior market analyst at Western Union Business Solutions.

“Dollar bulls are just pulling some chips off the table,” he said.

Data on Thursday showed the number of Americans filing new claims for unemployment benefits rose unexpectedly last week, an indication that the labour market recovery from the COVID-19 pandemic continues to be choppy.

The Japanese yen and the Swiss franc, perceived as safe-haven currencies, declined as a downward spiral in U.S. Treasury yields ran out of steam and risk appetite began to recover. Wall Street followed European stocks higher to erase some of the losses triggered by growth worries earlier in the week.

“Yesterday’s decline in dollar-yen is reversing together with risk appetite in equities suggesting no wider spillover effects across markets for now – the same move is seen in the U.S. 10-year yield bouncing back above 1.3%,” said Steen Jakobsen, chief investment officer at Saxo Bank.

“This week’s price action suggests a technical risk-off with a bigger repositioning of reflation trades.”

The Canadian dollar strengthened 0.25% against the U.S. dollar to $1.25 after data showed Canada added more jobs than expected in June as public health restrictions were eased in several regions of the country.

Elsewhere, the People’s Bank of China said on its website it would cut the reserve requirement ratio for all banks by 50 basis points, effective from July 15.

China’s yuan was broadly steady after the announcement, although it appeared to accelerate the recovery in risk appetite, with the Australian and New Zealand dollar ticking gradually higher following the news.