A snapshot of some of the markets into the North American closes shows:

The initial jobless claims came in at 684K for the current week. That was the lowest cycle low since the pandemic shutdown.  The level is still above the prepandemic levels in the 260 to 282K level.  However, it is a step in the positive direction.  The prior week claims was revised to 781K from 771K previously reported. Last week’s data corresponded with the BLS survey for the next employment report. That was still lower from the prior month, but still higher than the values this week (for what it is worth)

In other data today, the 4Q GDP was revised higher to 4.3% from 4.1%.  Inventories contributed to the gains. Although better on the surface, the market is more concerned about later vs last quarter (or even the 1Q which is coming to an end.  With the added fiscal stimulus increasing the debt burden, the bet is growth down the road (with higher corporate taxes) will start to  lower those deficits.  Of course the US budget is swimming upstream as a result of things like Social Security and Medicare which will only cost more and more, but it is also important to keep the deficit in sight.  Higher GDP is needed.

From the Fed officials today:

The comments are congruent with the Fed Chair (maybe not the market, but time will tell who is right).

The US debt market was trading near unchanged generally, into the treasuries auction of $62 billion of seven year notes. Recall from last month, the auction went horribly with a 4.4 basis point tail and the worst to bid cover on record.  Today’s auction was better (thank goodness it wasn’t worse) but still had a tail of 2.5 basis points, and the bid to cover was not all that great either. As a result yields backed up. The 10 year is up 1.8 basis points at 1.626% (the low reached 1.588%). The 2-10 year spread widened to 148.94 basis points from 146.19 basis points at the close yesterday.

In the forex, a snapshot of the strongest to weakest is showing GBP as the strongest and CHF as the weakest. The USD is mostly higher with the dollar rising by 0.40% to 0.47% vs the EUR, JPY and CHF. The dollar was unchanged vs the AUD and lower against the GBP. The GBPUSD rose for the 1st time in 6 days. 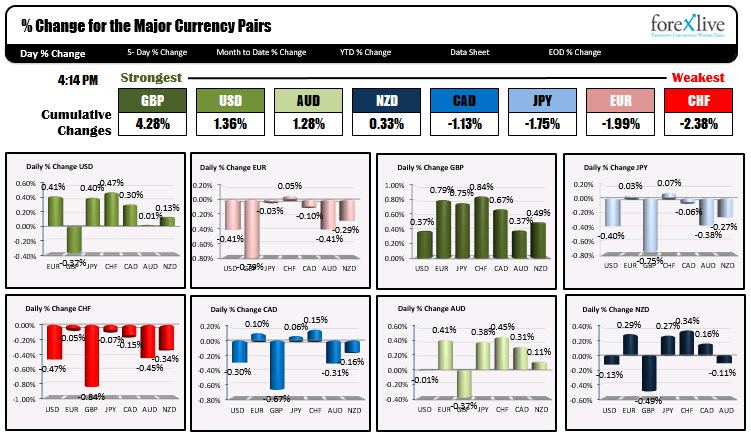 A look at some of major currency pairs technically: