A summary of some of the “other” markets is showing:

The ECB kept rates unchanged as expected and see a modest increase in GDP growth in 2021 (4.0% vs 3.9% in December) and higher inflation (1.5% vs 1.0% in December), but the inflation rate remains below the 2% target.  The central bank did say they would increase PEPP (pandemic emergency purchase programme) at a faster rate, but did not say by how much. She did say that it was not in an effort to exert yield curve control (as a result of the move higher in longer term rates more recently).  The EURUSD initially moved lower (staying below the 200 hour MA in the process), but after falling back to unchanged on the day, the pair moved higher and is closing near the highs for the day.

In the USD debt market, the US treasury successfully completed the weekly note and bond refunding by auctioning off $24 billion of 30 year bonds at a high yield of 2.295% (it would be a story if they couldn’t successfully complete the auction but from demand standpoint, the auctions were a “success”).  Although the tail was 0.5bps, the Bid to cover was near averages and the “directs” support was decent. The yield on the 30 year moved lower after the auction and is trading at 2.276% near the end of day.

In the forex market, the CAD was the strongest. The JPY was the weakest. The USD is closing lower as well and just ahead of the JPY as the weakest. The USDJPY was only stronger vs the JPY by 0.07%. It fell by -0.71% vs the CAD and 0.70% vs the  AUDUSD. Below are the % changes of the majors currencies vs each other along with the ranking of the currencies from strongest to weakest. 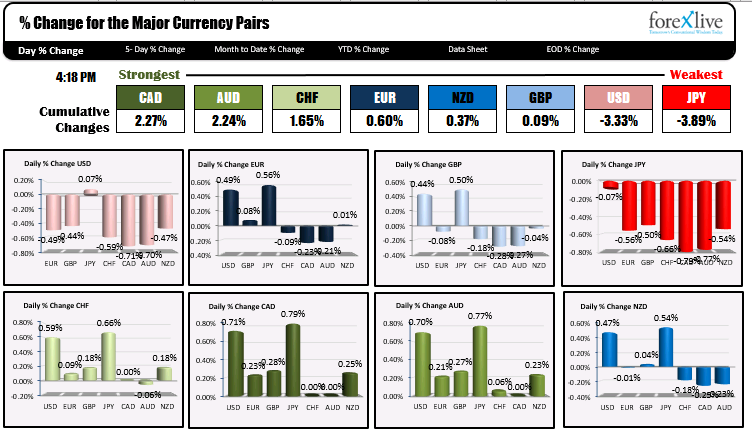 What are the technicals saying as the market moves into the new trading day (and final day of the week)?  Below is a summary for the major currencies vs the USD: