Currently, EURCAD’s rate is down -2 pips (-0.02%) from the hour prior. EURCAD has seen its price go down 4 out of the past 5 hours, thus creating some compelling opportunities for bears. If you’re a trend trader, consider that the strongest clear trend on the hourly chart exists on the 50 hour timeframe. Price action traders may also wish to note that we see a doji candlestick pattern on EURCAD. Given that we see downtrend on the 10 hourly candle timeframe, and that such candlestick patterns often denote reversals, this may be worth noting. The moving averages on the hourly timeframe suggest a choppiness in price, as the are all in a mixed alignment — meaning the trend across timeframes is inconsistent, indicating a potential opportunity for rangebound traders.

The back and forth price flow continues for EURCAD, which started today off at 1.47219, down 8 pips 0.05% from the day prior. Out of the 39 instruments in the Forex asset class, EURCAD ended up ranking 23rd for the day in terms of price change. Below is a price chart of EURCAD. 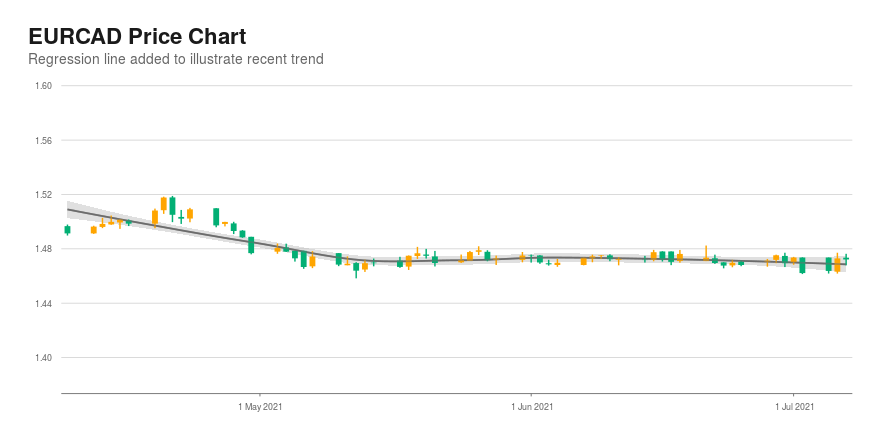 First things first: EURCAD crossed below its 50 day moving average yesterday. The clearest trend exists on the 90 day timeframe, which shows price moving down over that time. For additional context, note that price has gone up 15 out of the past 30 days. And for candlestick traders, a special treat: there is a pin bar pattern showing up on the charts as well. Rejoice!