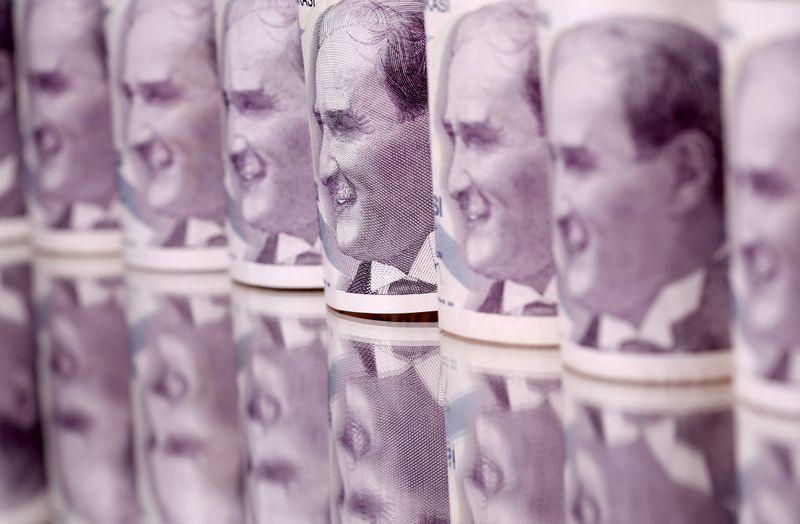 ISTANBUL (Reuters) – The Turkish lira’s dramatic slump has added fuel to a surge in cryptocurrency trading in the country, data showed, with investors hoping to both gain from bitcoin’s rally and shelter against inflation.

earlier this month, stoking fears of looser policy and rising price pressures that could erode the lira’s value.

The aftermath of the Agbal’s sacking accelerated an already growing boom in Turkey’s crypto market.

Trading volumes between the start of February and March 24 hit 218 billion lira ($26 billion) with a spike on the weekend of Agbal’s ouster, data from U.S. researcher Chainalysis shared with Reuters showed, surging from a little over 7 billion lira in the same period a year earlier.

The jump echoes soaring global interest in crypto, driven by bitcoin’s rally to a record of just under $62,000 as major investors and companies embraced the emerging asset.

Yet investors in Turkey said a weaker lira and inflation pressures, as well as hopes of quick gains, have driven demand.

Many of them shrugged off the volatility of cryptocurrencies, which financial watchdogs across the world have warned could lead to investors losing their money.

“If my savings are in lira, they are losing value,” said Izzet Emre Ari, a 25-year-old computer engineer who started investing in crypto two months ago.

“Sometimes I watch its performance like a horse race,” said Ari, who has added savings to his crypto account now holding some $4,000.

Bitcoin’s march to record highs has come as governments and central banks open the stimulus taps to counter the economic damage caused by the COVID-19 pandemic.

A narrative that its limited supply makes it impervious to inflation – bitcoin is often seen as a store of value, despite its volatility – has partly fuelled its gains.

In Turkey, inflation jumped more than expected to nearly 16% in February, well above a 5% target.

Turkish residents and businesses have long piled into gold and foreign currencies to shield themselves from lira wobbles, with dollarisation near record highs.

“Turkish people like stable assets due to our history of high inflation,” said Ozgur Guneri, CEO of cryptocurrency exchange BtcTurk, which attracted over a million new users between January and March. “That is why generation after generation of Turks invested in gold, real estate and dollars.”

Between March 20-24, when the lira tumbled 10% after the central bank governor’s sacking, crypto worth 23 billion lira ($2.8 billion) was traded, the data showed, versus 1 billion lira in the same period last year.

Turkish Google searches for cryptocurrency hit a record high in the week before the sacking.

Analysts said investors bought stablecoins, designed to avoid the volatility of bitcoin, on the weekend of the ouster before converting to dollars when forex markets reopened.

Trading volumes of Tether, a major stablecoin, hit 2.2 billion lira ($265 million) on the weekend of March 20-21, versus around 39 million lira a year earlier, data showed.

“Crypto exchanges are open 24/7,” said Altug Isler, an analyst and founder of the Kripto Teknik website. “A lot people bought Tether that weekend, preparing for Monday.”