The GBP/USD pair closed at $1.3828 after placing a high of $1.3900 and a low of $1.3805. GBP/USD currency pair dropped amid the strength of the U.S. dollar. Despite hawkish comments from a member of MPC from the Bank of England, the currency pair remained depressed throughout the day.

BOE Credit Survey is Out – Lenders to Increase Unsecured Credit

The Bank of England credit conditions survey, conducted between June 1 and June 18, showed that the U.K. lenders had the plan to increase the availability of unsecured credit to households in the third quarter.

The Bank said that the availability of unsecured credit was already high in three months to May and was set to rise further over the next three months to end in August. Similarly, the demand for lending also increased in the second quarter and was forecasted to grow in the coming quarter.

If you are interested in trading GBP/USD with forex robots, check out our guide.

The Capacity Utilization Rate also fell to 75.4% against the projected75.7%. Whereas the Empire State Manufacturing Index increased to 43.0 versus the forecasted 17.9. The economic figures supported the U.S. dollar and added further losses in GBP/USD.

The U.S. dollar was strong on board despite dovish comments from Jerome Powell in his second day of testimony before the House of Representatives. He repeated that the Bank would continue to support the economy as the spike in inflation was transitory.

On the other hand, MPC member Michael Saunders said that it might become appropriate soon to reduce some of the stimulus provided for supporting the economy. Such a comment from Saunders prompted immediate speculation that the MPC might be preparing for an early drawback of its Q.E. program as expected to meet next month.

According to Saunders, the activities recorded in May were somewhat faster than the forecasts made by the Central Bank. In response, one course of action could be a call to the early winding up of the Q.E. Program.

GBP/USD was closed at $1.3828 after placing a high of $1.3900 and a low of $1.3805. GBP/USD currency pair dropped on Thursday amid the comeback in the strength of the U.S. dollar. Despite hawkish comments from a member of MPC from the Bank of England, the currency pair remained depressed throughout the day. 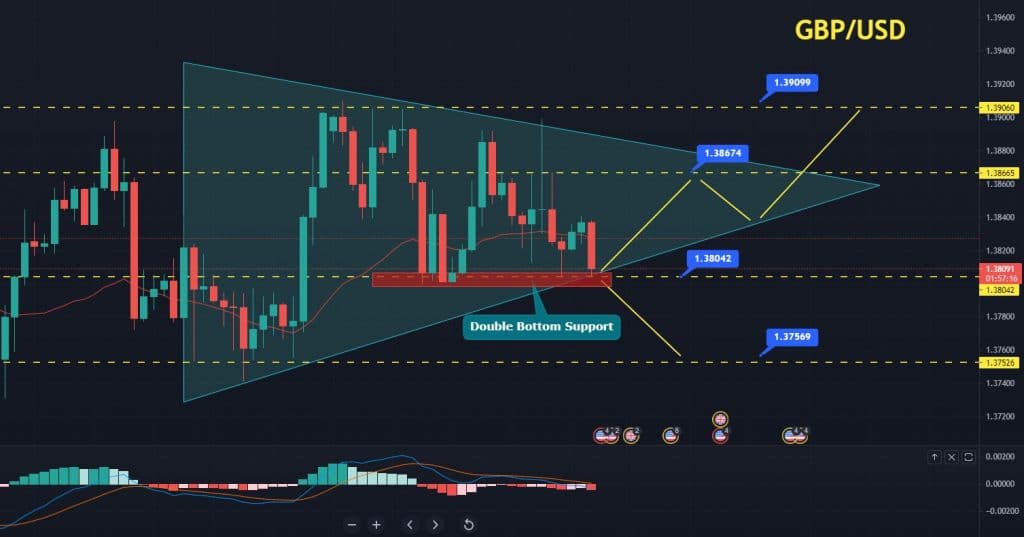 On the 4-hour timeframe, the Cable has closed a symmetrical triangle pattern. This pattern indicates indecision among investors and provides support at 1.3804. In contrast, the resistance stays at the 1.3867 level.

A breakout of an upward trendline or a symmetrical triangle pattern on the downside can lead Sterling towards the triple bottom level of 1.3756.

The 50 periods EMA (exponential moving average – red line) is holding steady at 1.3835, along with the MACD that’s closing histograms below 0. Both of the technical tools are supporting a selling bias in the GBP/USD pair.

The GBP/USD price forecast is neutral today. However, forex trading participants may look for a breakout opportunity. Selling trades can be captured below 1.3800 level with a target of 1.3750 level today. All the best.

67% of retail investor accounts lose money when trading CFDs with this provider. You should consider whether you can afford to take the high risk of losing your money.